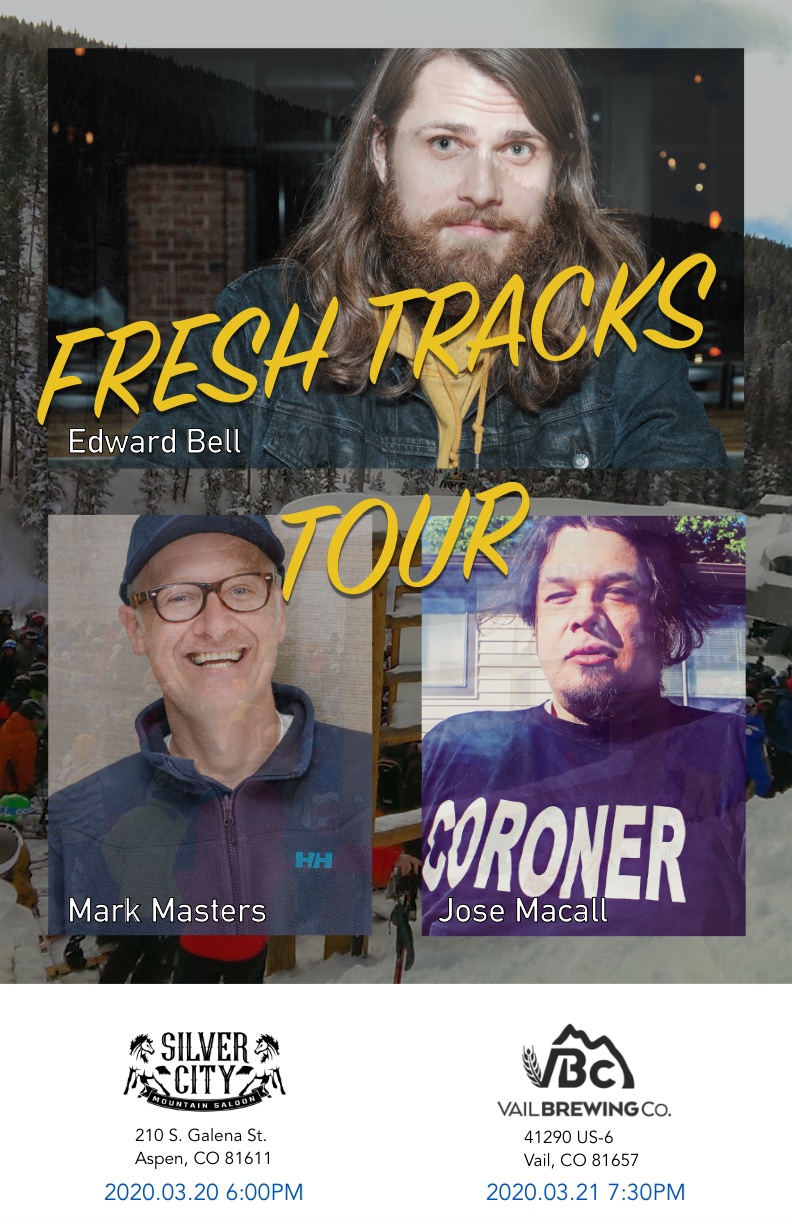 Jose Macall: Jose Macall is a joke-hawker from Denver, Colorado with a penchant for offbeat joke writing and a disarming delivery. His comedic acumen has allowed him to successfully infiltrate the High Plains Comedy Festival, Project Pabst, the Underground Music Showcase, Comedy Works as well as every dive, hideaway, nook and cranny with a stage to raid across the country. On Wednesday mornings you can catch him having candid conversations with sleepy friends and tired acquiantances live on the THREE AM podcast Edward Bell: Edward Bell is a former MLB superstar, former dancer, and former father of two from eastern Iowa. He now performs stand up comedy in Denver, CO. He hosts the Carabiner Comedy Show at 14er Brewing & Beer Garden.  He has written for the Hard Times. He used to live in a van, but now he doesn't. There were too many complaints. (Vail only) Hannah Jones: Hannah is a stand up comedian, writer, and improvisor based in Denver, Colorado. After being homeschooled in a religious co-op, her irreverent takes on sex, religion, and politics are as original as they are deeply uncomfortable for her mother to hear. This year she was invited to perform at the Beast Village and High Plains comedy festivals. Above all of that, she holds the career defining title of the 2007 Fayetteville Christian Homeschool Chess Club's "Most Improved," and has been improving ever since. (Vail only) Jacob Jonas: Jacob Jonas is an animated and eccentric comedian based out of Denver that pushes the boundaries of traditional stand up comedy. Jacob discusses a variety of topics ranging from personal anecdotes of hilarity to large scale historical socio-political trends in a distinct absurdist fashion. Jacob’s style of comedy is dark yet is presented with quick wit and strong punchlines that leaves the audience wanting more. He has worked with comedians like Al Jackson and Nathan Lund. He has traveled the country doing stand up and has performed at comedy clubs such as Comedy works in Denver, CO, Hyena’s in Dallas, TX, and The Gotham in New York City. Mark Masters: Mark Masters is a Denver, Colorado based comedian. He hosts and produces the monthly Vail Comedy Show which has showcased touring comedians Christie Buchele and Derrick Stroup. He has a podcast and web series, creatively named "Mark Masters", and you can buy the story of his comedy journey "Not Good Yet" almost anywhere books or audiobooks are sold. (Aspen only) David Uhlfelder: Born and raised in Aspen, Colorado, David Uhlfelder grew up in a constant battle for survival against frostbite and forest fires. Somehow he escaped with his life and most of his fingers, choosing to waste his survival on being a comedian. David has performed at clubs around the country and opened for the likes of Taylor Tomlinson and Trevor Wallace. He finished runner up at the 2020 Aspen Laughs Fest Comedy Competition and once was featured on ESPN 3. As always we may have some special guests dropping in too, so arrive early for good seating, and be ready to let loose by the published showtime. Lineup subject to change.